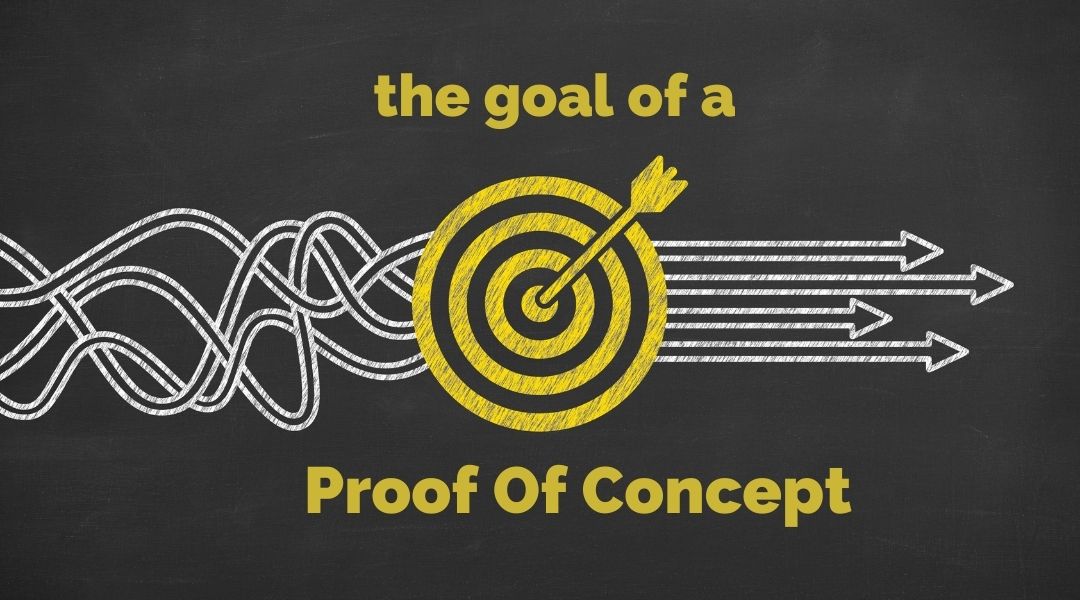 An essential element for stress testing your idea is to define and run a time bound Proof of Concept (PoC).

From my experience the optional time frame for running a PoC is between 80 – 100 days. Any longer and you will find that you are running well beyond a controlled test (where cost and scope will steadily grow and soon turn into a full scale project).

Much shorter will compress your thinking time and most likely inhibit your ability to create a simple prototype and then gather feedback from the parties you would expect to use your product or service.

There will inevitably be cost to this phase of work. This could simply be your time, or more likely, actual monetary cost in developing something basic. A Minimum Viable Proposition (MVP).

This MVP will provide evidence of whether your idea has wider interest.

Having developed the Vision of A survivor’s guide through cancer. Home for trusted knowledge and resources we decided it was critical to test the value of this idea for one type of cancer, and if this was successful the idea could steadily be scaled.

Through her experiences, Avril had developed a deep understanding of Breast Cancer and understood first hand what it was like to try and find, understand and internalise all the necessary information to make informed decisions throughout the whole process.

Knowing there would be a lead time to define the practical elements of how the Proof of Concept would work we agreed on a simple, time bound Goal –  By the end of the year, build a working prototype survivor’s guide for breast cancer. Test service and gather feedback.

Once written this goal was very clear and started to become real for all of us in the workshop. The next steps in the process then become clear. To define the start and expected end point of the Proof of Concept.

The start point for the Proof of Concept phase.
For most ideas this is relatively straight-forward for the simple reason that you are “beginning at the beginning”, and in most instances only have an idea either in your head or written on a piece of paper.

It is important to start thinking in terms of some big categories of work which would need to be tested/evaluated for the idea to be properly addressed.

Some of the most common categories for testing an idea are ‘Product/proposition’, People/Stakeholders’, ‘Process’, ‘Governance’, ‘Communications/Marketing’.

So for example under Product/proposition you may have ‘Idea and concept outlined in a proposal document’ or YouTube mock up video created to illustrate the concept and basic idea.

Then under ‘People/Stakeholders’ you may have ‘Founder with initial idea and initial team of supporters’.

It is important to be honest at this stage and not exaggerate in any way what people or resources are available. Keep everything simple and typically a one sentence summary to explain each relevant point. For Avril, the starting point for her idea was forming a registered company and idea of base proposition.

The expected end point of the Proof of Concept phase.
The next stage is to then summarise the expected outcome which will have been achieved once the initial PoC test has been completed.

It is important to to be realistic and visualise what could be possible to achieve in a 100 day concentrated work effort. As we worked through options for Avril’s idea we agreed that an ambitious yet achievable objective would be a “Working website with breast cancer content and resources from relevant parties”.

The principal activities which needed to be completed.
Once the start and end point for the Proof of Concept has been defined there is an exercise to carry out to build the bridge between the two points by identifying the key steps or activities which need to be undertaken to move from point A to point B.

You don’t want to get too granular for this stage but also it’s important not to gloss over any essential steps needed to achieve the desired end point.

Get each person in the brainstorming session to spend 5-10 minutes writing individual activities on post-it notes and then collate and remove duplicates.

Working through category by category also makes it easier to focus the mind on the most significant activities which need to be carried out.

Two essential components to completing this stage successfully are to determine a logical order and identify an owner who can successfully carry out the identified step.

As a default, the person who came up with the idea should assign the action to themselves – but ideally, if they have already started to build a team around them it’s more powerful to allocate tasks amongst everyone.

For the work with Avril we built a working plan of how to achieve the primary goal “By the end of the year, build a working prototype survivor’s guide for breast cancer. Test service and gather feedback” in approximately 40 minutes.

We then spent approximately 20 minutes stress testing the plan, adding other essential tasks, setting a logical order and identifying owners.

The final two elements of the Dream on a Page model involve first defining Measures of Success for each expected outcome – and then identifying the Critical Success Factors, perhaps the most most important step of all. Let’s drill into each element in turn.

Identifying the key Measures of Success.
‘What gets measured gets done’ has been attributed to many people including Peter Drucker, Tom Peters and Edwards Demin.

Measuring something takes a level of commitment and can feel uncomfortable, particularly if the success of failure of an activity can depend on the outcome.

Defining a measure of success up front for an idea you are passionate about, when the expected outcomes are still just words on a piece of paper, can feel like making a commitment too soon.

This, however, is one of the most important steps as without setting a base threshold for your idea to pas, you will be very likely to justify any outcome as successful.

For Avril’s idea we knew that whilst creating a working website for Breast Cancer content and resources from relevant parties was an important step, the measure of success would be through receiving positive feedback from pilot users covering both the usage and the value of the information they could access from one source.

Critical Success Factors.
Whilst the measures of success are important in setting a minimum threshold for your initial test, the critical success factors are probably the most important elements of all.

Think of critical success factors as your base assumptions or design elements which need to be true for your idea to succeed. The important word here is ‘Critical’ so think carefully for each statement that you define and commit to.

The danger is to create a laundry list of critical success factors which cover every conceivable option and variation. But this approach will not serve you well.

The Critical Success Factors should be your entry requirements for your idea to proceed to the next stage of development so if any of the elements aren’t met you should seriously think about the validity of your idea.

For Avril’s idea two of the most important Critical Success Factors were that her website should be ‘Easy to use, simple and clear’ and that ‘Companies/organisations would be willing to use the site and keep essential material up to date’.

During the brainstorming workshop we agreed that these two factors (plus a small number of others) were critical elements for her idea to be classed as successful- and all decisions on design and service of the capability needed to be against these benchmark criteria.

When all these elements are combined they create the alchemy for extracting your idea and laying out into a visual one page model – your Dream on a Page. 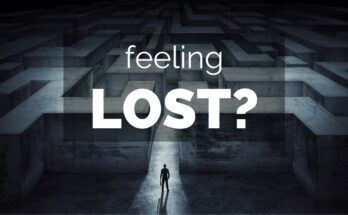 Consider getting a guide to help you 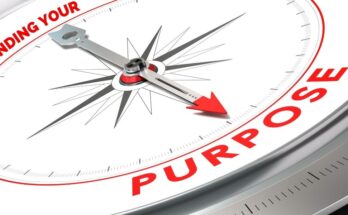 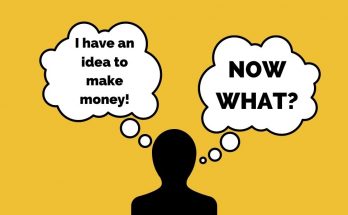 I have an idea to make money – now what?

Make money from property without owning any

How to make money from what you already know

Consider getting a guide to help you

I have an idea to make money – now what?

How to get started as an entrepreneur?

Who can be an entrepreneur?

How to scale your business, and the challenges of growing too fast …

The art and science of ‘Pivoting’ to develop your brilliant idea

How can I make money with my mobile phone?

We use cookies on our website to give you the most relevant experience by remembering your preferences and repeat visits. By clicking “Accept All”, you consent to the use of ALL the cookies. However, you may visit "Cookie Settings" to provide a controlled consent.
Cookie SettingsAccept All
Manage consent

This website uses cookies to improve your experience while you navigate through the website. Out of these, the cookies that are categorized as necessary are stored on your browser as they are essential for the working of basic functionalities of the website. We also use third-party cookies that help us analyze and understand how you use this website. These cookies will be stored in your browser only with your consent. You also have the option to opt-out of these cookies. But opting out of some of these cookies may affect your browsing experience.
Necessary Always Enabled
Necessary cookies are absolutely essential for the website to function properly. These cookies ensure basic functionalities and security features of the website, anonymously.
Functional
Functional cookies help to perform certain functionalities like sharing the content of the website on social media platforms, collect feedbacks, and other third-party features.
Performance
Performance cookies are used to understand and analyze the key performance indexes of the website which helps in delivering a better user experience for the visitors.
Analytics
Analytical cookies are used to understand how visitors interact with the website. These cookies help provide information on metrics the number of visitors, bounce rate, traffic source, etc.
Advertisement
Advertisement cookies are used to provide visitors with relevant ads and marketing campaigns. These cookies track visitors across websites and collect information to provide customized ads.
Others
Other uncategorized cookies are those that are being analyzed and have not been classified into a category as yet.
SAVE & ACCEPT